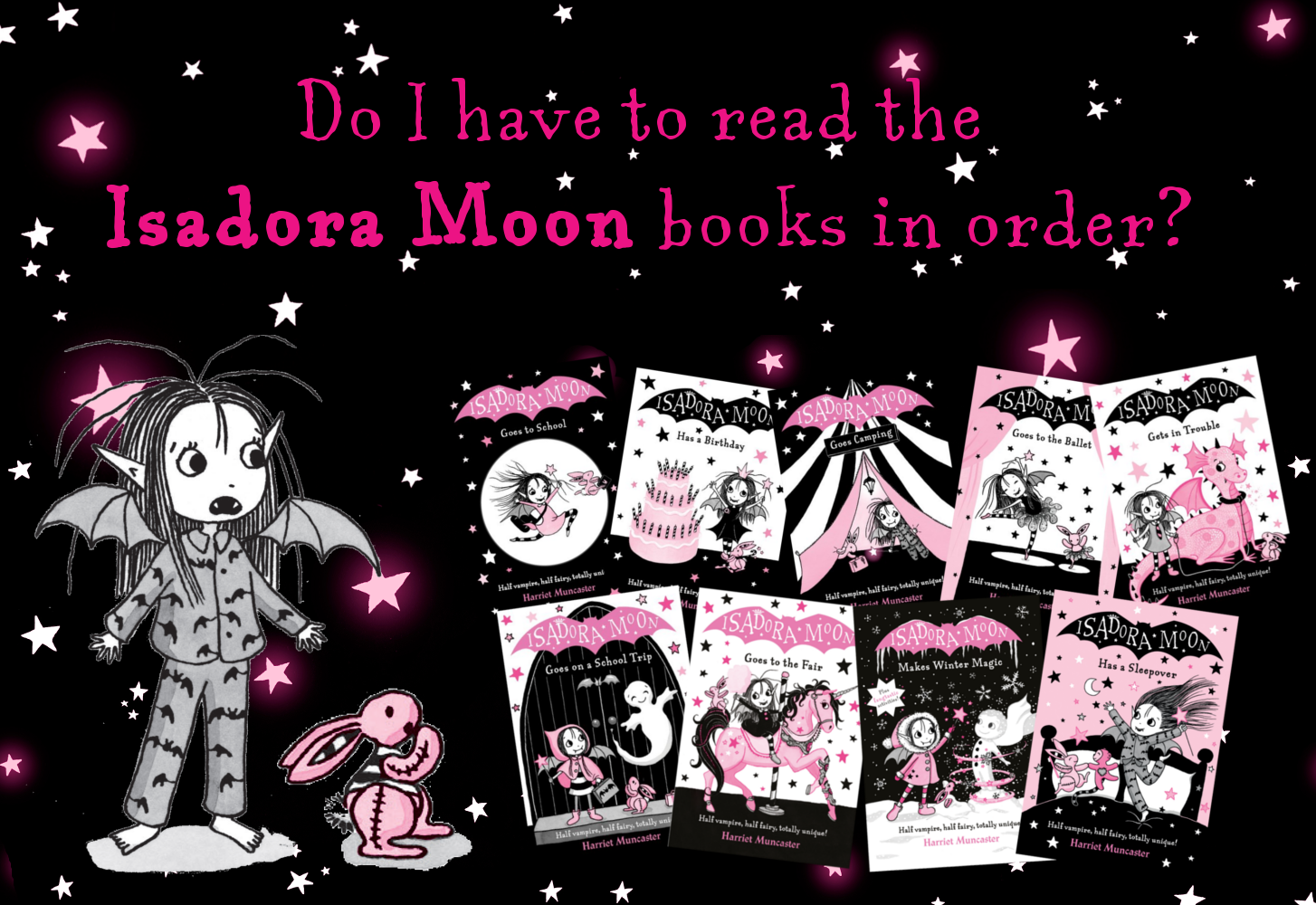 What order should I read the Isadora Moon series in?

One of the questions I most commonly get asked is if the Isadora Moon series has a specific reading order. The short answer is no, but here’s a slightly longer answer…

Isadora Moon Goes to School is the first book

Isadora Moon Goes to School is the original Isadora Moon story, and gives the most extensive introduction to Isadora’s character and family. As the title implies, it’s all about Isadora starting school for the first time and deciding what sort of school she should go to. Given that some of the later stories feature scenes at Isadora’s school, savvy young readers will work out how Goes to School ends if they didn’t start with that book!

If that’s not of any concern, then just start with whichever book you like the sound of best. None of the other books ‘follow on’ in a sequel sense, although they do have some links which I’ll share just for fun below. If you do want a potential reading order though, here are the UK and US publication orders:

The order in which the books were published in the UK (and the order I wrote them in) is as follows:

Not all titles have yet been released in every country where Isadora Moon has been published, but most countries have more-or-less stuck to the above order. The one which has the most changed order is America:

US publication order of Isadora Moon

Links between the Isadora Moon books

I think the Isadora Moon books take place more-or-less chronologically in the order I wrote them (the UK publication order). Because of this, there are some little nods to Isadora’s earlier experiences in the later books. (Mild spoilers follow!)

Isadora Moon Goes on a School Trip opens with:

“I have only ever been on one school trip before—we went to the ballet—so I was very excited when our teacher, Miss Cherry, announced that we would be going on another one in a week’s time!”

Referencing, of course, Isadora Moon Goes to the Ballet.

When Isadora Moon Has a Sleepover with her friend Zoe, Zoe suggests they share some spooky ghost stories:

She began to tell a story. It was about an old woman who trailed the streets of our town after dark, dragging chains behind her that clinked and clanked all night long.

‘That sounds a bit unrealistic,’ I said, thinking about the friendly ghost, Oscar, who lived in my attic at home. ‘Let me tell you about my real ghost!’

‘But Oscar’s not scary,’ said Zoe.

‘Ghost stories have to be scary. That’s the point of them.’

We first met Oscar the ghost in Isadora Moon Goes on a School Trip.

When Isadora Moon Goes to the Fair, she wants to bring her witch fairy cousins Mirabelle and Wilbur along, to which her mum replies:

‘Well . . . I suppose we could ask them,’ said Mum. ‘And it would keep your naughty cousin Mirabelle out of mischief, at least.’

The last time we met Mirabelle, in Isadora Moon Gets in Trouble, she convinced Isadora to bring a magical dragon to her human school, against Isadora’s better judgement.

School friends like Zoe, Oscar, Bruno and Sashi appear in lots of stories. Isadora’s cousins Wilbur and Mirabelle appeared separately in Isadora Moon has a Birthday and Isadora Moon Gets in Trouble respectively, then both returned in Isadora Moon Goes to the Fair.

For book number eleven, which I’m currently working on but can’t say too much about yet, a certain magical friend from an earlier book will be making a comeback too. I’ll give you a hint: she gave Isadora a magical piece of jewellery.

Does Isadora grow up over the books?

There are a couple of other related questions I sometimes get asked:

I know it’s a bit of a non-answer, but I always say Isadora is the age you want her to be. She’s just starting school in the first story, so I she is probably somewhere between five and seven, maybe eight. Of course, she’s half-vampire and half-fairy and I haven’t really gone into how long either of those magical creatures live for, so maybe Isadora is actually 107! … but maybe not!

Time obviously passes over the series, but I don’t really see Isadora growing up or moving through the school years. I’m not really sure why exactly, it’s just quite nice for Isadora to kind of remain in a ‘timeless’ period of her life.

The Isadora Moon books are available to buy at Waterstones, Amazon and lots of lovely independent book shops. And if you fancy creating your own Isadora stories, or stories with characters you’ve made up, then you could try my free downloadable story writing guide!

Don’t forget to say hello on Facebook, Twitter or instagram, and if you’re looking for a present for the Isadora Moon fan who already has all the books, why not try my shop?