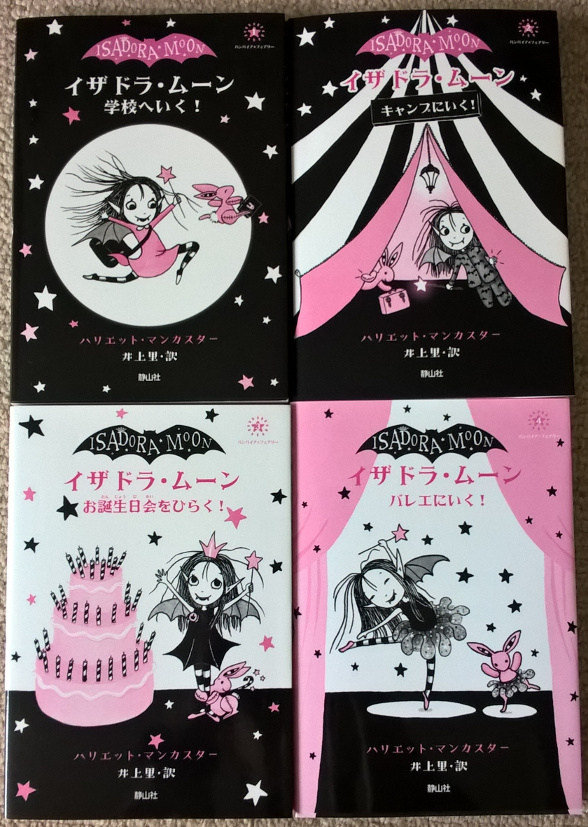 A few days ago OUP kindly sent me copies of the French and American versions of Isadora Moon. Having quite a collection now, I thought it was time to blog about some of the interesting differences between the international releases.

It’s so strange seeing something familiar you’ve created written in words you don’t recognise. For most of the versions though, there are a lot of similarities in the words. ‘Vampire’, for example, doesn’t change much:

Okay, for that last one I’m less sure that word is vampire, as there are two different versions of the word. ‘Víla’ also  appears, which I think is ‘fairy’, but could be ‘vampire’ if they changed the order of the tag line like some versions have.

I tried to check with Google translate, but it didn’t recognise the word on its own, so I tried pasting in a blurb from www.bookbox.sk. Here’s what it spat out:

Mummy has a vampire and a vampire’s father, and she has got everything from everything. He adores the night, the bats and the black ballet skirt, but he does not even allow the sun rays, magic balls and pink bush.

The Slovak edition is interesting as it’s the only one I’ve been sent which changes my name: Harriet Muncasterová.

It’s also one of three which changes Isadora’s name:

Speaking of name changes, I was interested to see how the name of this character changes in the different foreign editions of Isadora Moon Goes to School:

In Welsh he is Mistar Mostyn. I couldn’t find a translation for this, except that Mostyn is a village in Wales. The Danes kept the French Pamplemousse, while in the Netherlands he was translated to meneer Pompelmoes, making him literally ‘Mister Grapefruit’ in their native language. The Spanish edition similarly calls him Monsieur Pommelón, so they kept the French title, but gave him the Spanish equivalent of ‘grapefruit’ for a surname.

The Slovak version stuck with the fruit theme, naming him monsieur Pomaranč, but this translates to Mr. Orange. Meanwhile, the American publishers asked for an alternative name entirely, so I suggested Mr. Sparkletoes.

Of all the foreign editions, the American edition, despite still being in English, made the most changes. They’re the only ones so far to go with a completely different cover design for Isadora Moon Goes Camping, and to change up the slogans. All the other editions have ‘half vampire, half fairy, totally unique!’ across all editions. But Random House New York reversed the order of ‘fairy’ and ‘vampire’ on Isadora Moon Goes to School, and used ‘Magic in the great outdoors’ for Camping. They also used different fonts on the cover to the other countries, especially for my name. Oh, and of course they added an extra colour to the pink and black: yellow for School and bluey-green for Camping.

Isadora Moon visits the Land of the Rising Sun

Last up are the Japanese editions. I can’t say much about changes to word choices here as I can’t even begin to read the text! These feel like properly foreign editions. One thing I did notice about them is, like the American edition, these books are numbered from one to four. These are the only two foreign editions to make Isadora Moon into a numbered series. However, apart from Isadora Moon Goes to School introducing the characters and how Isadora Moon met her human friends, the stories all stand alone and can be read in any order. I wonder if it’s because the Japanese are used to serialised Manga novels?

Anyway, I love the way these look with the Japanese text, and I love the soft shiny slip-covers these foreign editions come in.  Of course, what I love most of all is that so many people around the world now have the chance to enjoy something I’ve created. It seems that Isadora Moon really has gone international!

To read more about the different Isadora Moon check out my books page , or you can buy copies of the English version (and most of the translations) from Amazon