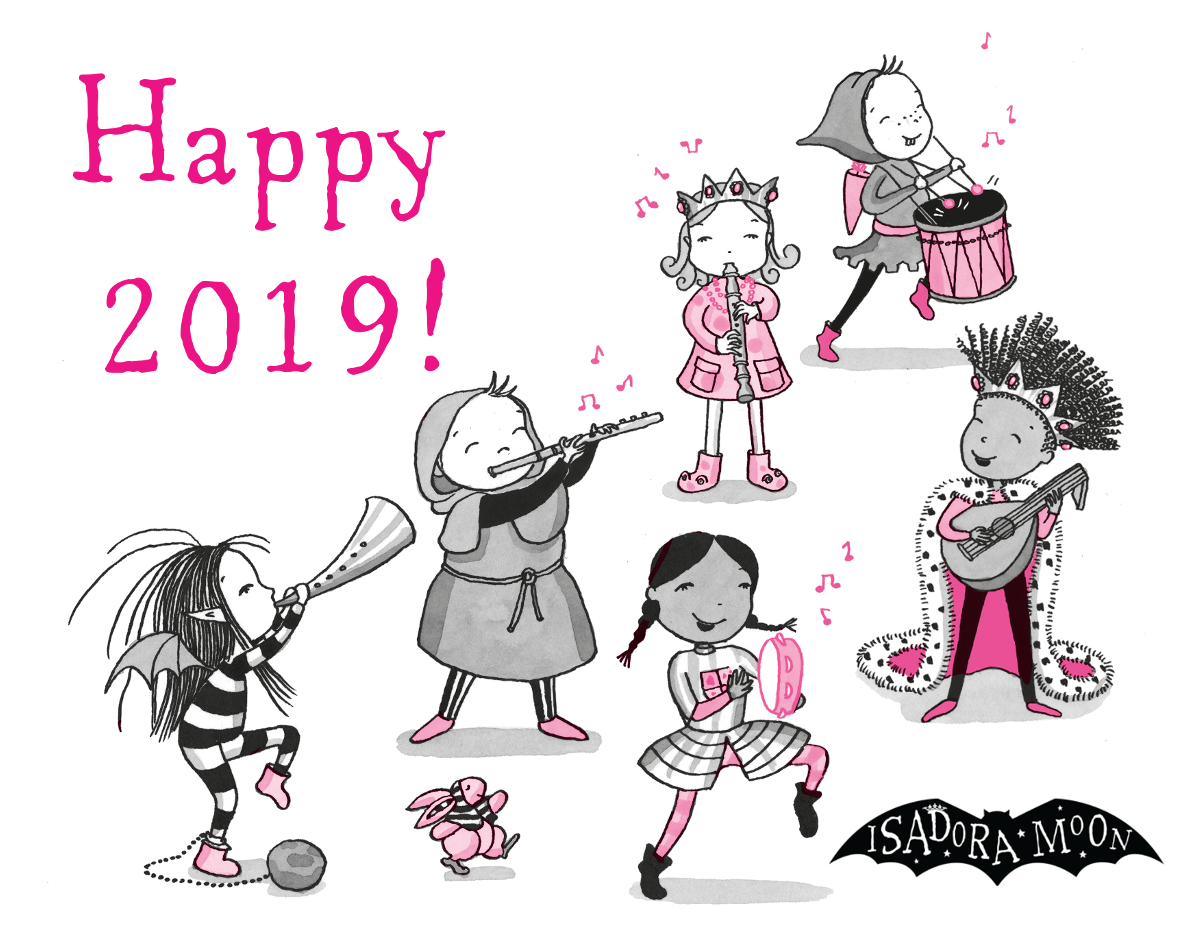 Following on from yesterday’s reflections on the last twelve months, I wanted to share some of the things I’m excited about in 2019. It’s already shaping up to be my biggest, most Isadora-y year yet!

Last October I ventured out of the UK with Isadora for the first time to visit Dublin. I sometimes get messages from around the world from people who have read Isadora Moon, but it was amazing to actually meet Isadora Moon readers in another country.

In 2019 I have no fewer than three overseas trips planned! In March, Henry and I will be flying out to Dubai for the Emirates Airline Festival of Literature. My parents used to live in Dubai for my dad’s job. I was also born in Saudi Arabia when my parents lived there for a while, so I have a bit of a connection to that part of the world. It will be exciting to return!

In April, Oxford University Press have invited me to come out to Bologna Children’s Book Fair. I’ll get to meet some of the international publishers of Isadora Moon. I went to Bologna Children’s Book Fair once before as an MA Illustration student. The following year, my course leaders took the students’ final project work there to display. I was fortunate enough to have my work picked up, which then became my first published picture book: I am a Witch’s Cat.

I’ve had quite a few requests for my third foreign trip, but it might finally be happening this year: Spain! Specifically, a visit to Madrid in May has been suggested. We haven’t confirmed any absolutely definite dates or plans yet, but it’s looking likely this will go ahead, and I can’t wait!

I’m hoping to be able to offer some more merchandise in my shop soon. The Pink Rabbit pins have proved popular, and I’ve now paid off the original cost of ordering them. This means I can look into ordering some more merchandise. In the next few months, time allowing, I’m hoping to create some Isadora Moon greetings / birthday cards and some t-shirts. Here’s one idea I’ve had, which still needs some tweaking:

We haven’t seen the last of Isadora’s magical adventures yet. In March, Isadora Moon will be staying round her friend Zoe’s house for her first ever sleepover. There will be plenty of fun and games, with a little bit of magic sprinkled in, as well as some serious baking for a school cake competition. Here’s a little preview:

Right now, I’m working on book 10, which will be out in October 2019. I’m not sure the name’s been announced yet, so I won’t reveal it here, but here’s an uncoloured illustration I’ve recently shared:

When I shared the Sleepover image above, I received this lovely comment:

eek! becca is excited for this. Another one for the collection. Shes worried you might run out of ideas for books and she says that will make her really sad.  x

I’d just like to reassure Becca that she has nothing to fear just yet. I’m not sure I can say exactly how many further Isadora Moon books are in the pipeline, but I’m already thinking about the story for book 11, and there will be more to come after 2019. I love Isadora and I still have so many ideas for all the things her and her family can get up, so I’m delighted I get to continue spending time in her world.

Finally, I’ll hopefully be doing plenty of events in UK over the next twelve months, which I will continue to announce on my events page and my Facebook page. These include:

I hope that I’ll be able to see some of you at my events, and you’ll enjoy reading about Isadora’s latest adventures. Here’s to a new year full of magic and sparkle!