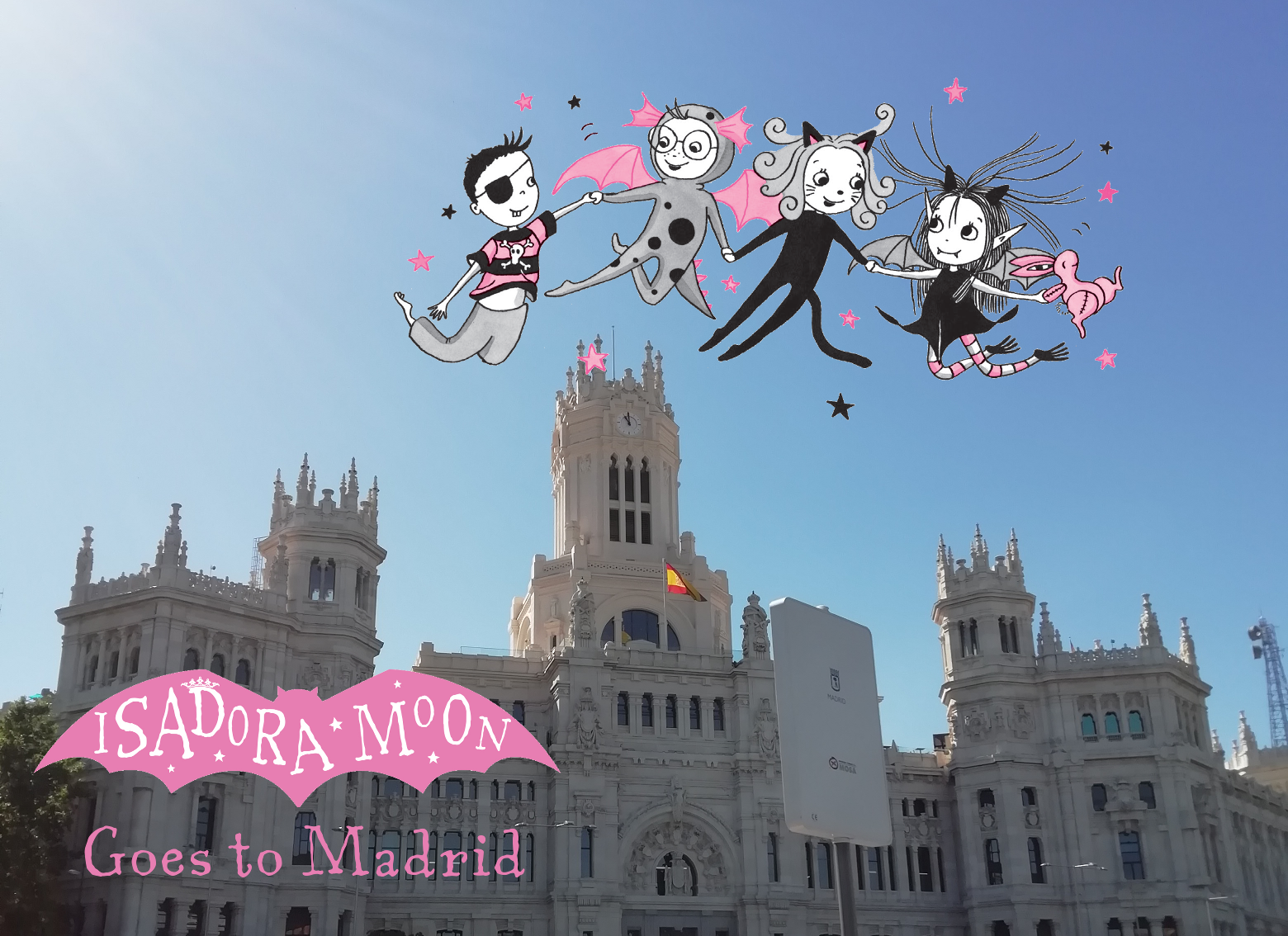 Behind the scenes, Events, Wonderful fans

¡Hola! I have just had the most wonderful trip to Madrid, Spain and I wanted to share it! I was invited out to Spain by Penguin Random House Grupo Editorial, who are the Spanish publishers of Isadora Moon. Spain is the country where Isadora is the most popular, accounting for 40% of worldwide Isadora Moon sales, so it was lovely to be able to go out and spend some time with the publishers and meet the Spanish children who enjoy my books!

Because it does so well in Spain, they even have Isadora Moon activity books published which we don’t have in the UK and it was really nice to see them out in the wild! There are four so far:

The first day in Madrid was full on. I had eight media interviews with radio stations, newspapers and press agencies, which I was whisked around the city in a taxi for. My first interview was at Radio Sol XXI for their Diver Club programme. You can listen here, although it is in Spanish!

Since I don’t speak Spanish, I had a translator called Isabel who came with me. It was actually quite tricky to concentrate on Isabel, whispering what the radio presenters were saying as they were saying it, while trying to shut out the Spanish language I could hear, and think of my answers to the questions, but I managed to do it. I am very admiring of translators and how they are able to focus on two things at once. I am a very one track minded person so I think I would have a lot of trouble being a translator myself!

After the Radio Sol XXI interview, we whizzed back to the hotel in another taxi for another 5 interviews. I’m not quite sure when or where all of them will be appearing, but here is my interview with the newspaper El Mundo. What I didn’t realise until near the end was that this was actually a live interview. As I was answering the questions through Isabel and over the phone, the journalist was typing out and publishing my answers straight away!

I also did a video interview for Hacer Familia, which you can watch here. This one has both English and Spanish audio, although the questions appear in Spanish. Later,  I did a couple more radio interviews which were at a studio outside the city. You can listen to the one with RNE here. Of course it’s in Spanish again, but you might be able to pick out some of my answers in English if you’re not a Spanish-speaker.

Anyway, the interviews all went well and I enjoyed answering all sorts of different questions about Isadora Moon. The most common question I got asked was ‘why are the books in pink and black?’ My answer for that is that I have always loved gothic things but I have also always loved sparkly fairy-type things and I especially love it when those two things are mashed together. I thought a half vampire, half fairy girl would be a perfect mix of the two!

I want to say thank you to Marta and Jorge, who looked after me all day. They made everything go really smoothly and made sure I had everything I needed – including ordering a really nice packed lunch of avocado toast and salad, that I could eat in the taxi. It was much needed as Spanish mealtimes are so much later than we’re used to! At home, we’re used to having lunch at 12 and dinner about 5.30pm because we like to eat with our two-year-old. Marta was telling us how people in Madrid often eat lunch about 3pm and don’t have dinner until 9 or 10 at night!

In the afternoon Marta and the Penguin Random House team, along with Beatriz Milan, had arranged an Isadora Moon party for some local influencers and their children. It was in this amazing place that was a toy and bookshop at the front, but had a big spiral slide and a floor made of netting at the back.

Inside lots of people were all wearing pink tutus and there were Isadora Moon biscuits and a craft activity for the children do as well. There were even some really cool Isadora Moon temporary tattoos, one of which I wore the next day.

I read the guests an extract of Isadora Moon has a Sleepover, we did some drawing and we did a quiz, all with the help of Isabel’s translation of course. Then I signed all their books. It was a wonderful party and so well planned, with pink and black starry tee-pees and Isadora balloons and bunting. I loved meeting all the children all dressed up in their pink tutus!

Thankfully I managed to sleep well that night as it had been a really tiring day so I felt refreshed for the following day. Our hotel room was really nice and quiet, unlike our bedroom at home which gets really noisy with drunk people shouting outside it at the weekends (we can’t wait to move!). I always notice the difference in quality of sleep in a quiet room! The arty decor in the hotel was lovely too. It was the One Shot Fortuny 07 Hotel if anyone’s interested in staying there.

On the Saturday morning we went to the park where the Madrid Book fair was being held. There were stands after stands of books and authors doing signings. Before I started my signing, I recorded a little video of quickfire Q&A for Penguin Random House with Marta and a videographer called Fernando.  Then it was time to go to my stand! The first stand I was in was for the bookshop Nebli and I had a 2-hour signing slot with them.

I had been warned about how hot it was going to be so I didn’t wear my tutu and Isadora costume for this. Instead I wore a floaty dress, but at least it was pink! I was so glad I did though as it was around 30°C that afternoon.  For lunch we went to a restaurant with Laia who is a senior editor at
Penguin Random House and who I had met briefly in Bologna. We had a good chat about Isadora and non-work things too, over some delicious food – thank you Laia!

Later in the afternoon I was stationed at the El Dragón Lector stand and it was much hotter and busier this time! I still really enjoyed meeting all the children who came to see me and it was wonderful to hear how many of them enjoy my books. I am also very thankful for all the lovely drawings and letters that they gave to me!

The Last Day in Madrid

The following day was more of the same. I was back at the Madrid book fair and doing another two-and-a-half hour book signing. This one was also pretty hot! Madrid was very hot this weekend! Some of the children had been to an Isadora Moon craft workshop and had made amazing Isadora puppets which they brought to show me. I also saw some incredible handmade Isadora dolls!

And then I was finished! My trip to Spain was almost over. I got a taxi back to the hotel where I had time to rest, start this blog post and get showered before the flight home in the evening.

Overall it was an absolutely wonderful trip and I mean that honestly. I have enjoyed my visit to Madrid so much – it has definitely been one of my favourite Isadora Moon trips ever! The people were all lovely, there was the perfect balance of work and rest so that I could recharge between events and it was amazing to see how many children read Isadora Moon in Spain!

Thank you to Penguin Random House Grupo Editorial for having me out in Madrid! I had a fangtastic time! 😊

If you enjoyed reading about my trip to Madrid, have you seen my blog post about my trip to Dubai earlier this year? You might also like to read a bit more about the international editions of Isadora Moon!