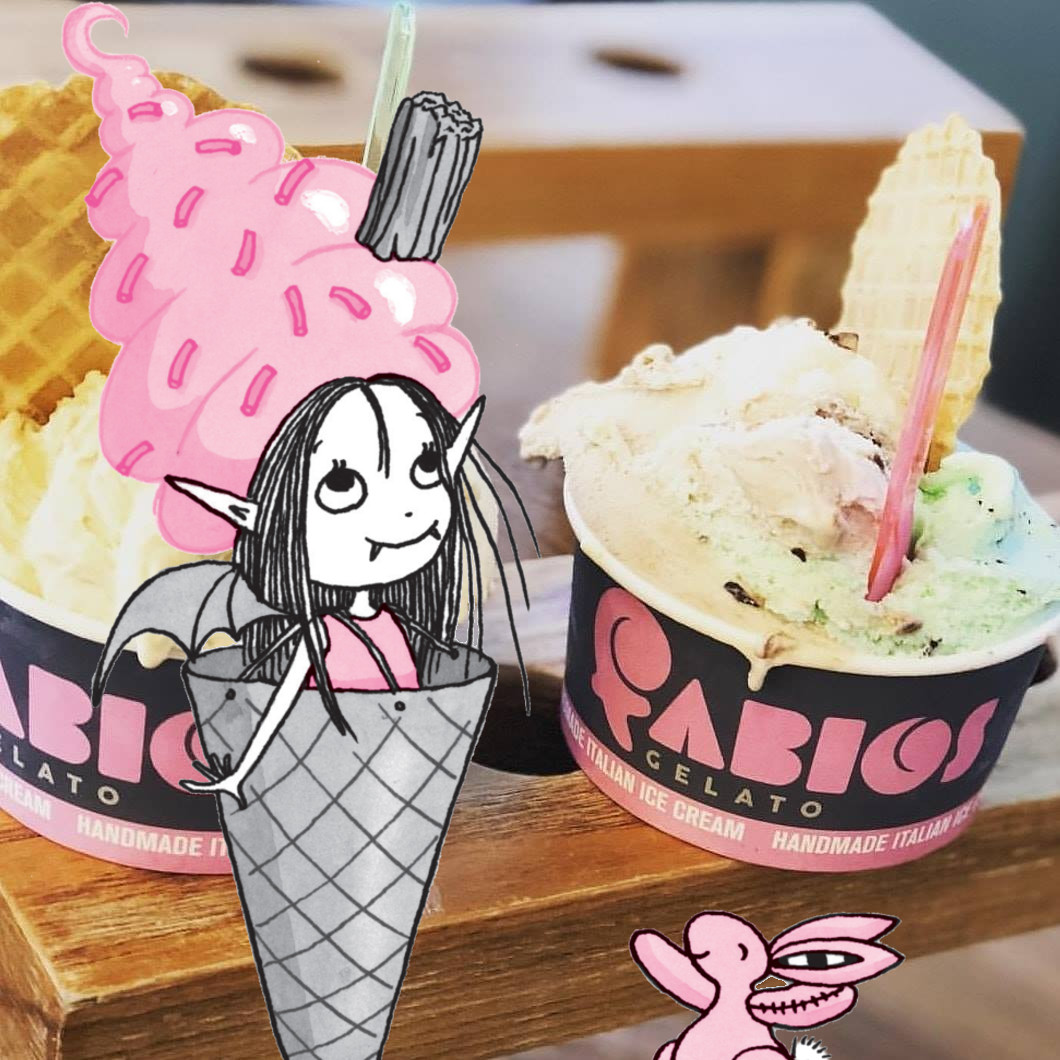 It’s just over a week since Isadora Moon Makes Winter Magic launched, and what a busy week it’s been! Here’s a quick roundup of some of the things I’ve been up to and sharing over the last week:

Last Thursday I was interviewed by Nick Coffer for his show on BBC Three Counties Radio. I’ve done one radio interview before for Fun Kids Radio, but that was pre-recorded. I was a little shocked after agreeing to the Three Counties interview to realise it was going to be broadcast live and be up to fifteen minutes long!

I was quite pleased with how the interview went in the end. You can listen to it here:

If you listened right to the end of the interview, you would have heard me talk about an exciting team-up with Fabio’s Gelato in my home town of Hitchin, Hertfordshire.  Just for the weekend after Halloween (3rd-4th November) Fabio’s will be selling limited edition pink-and-black Isadora Moon gelato. We’ll be announcing more details, including flavours, closer to the time. Keep an eye on both my Facebook page and Fabio’s Facebook page. Also, a special shout-out to my friend Catherine who came up with the idea for this collaboration in the first place. Check out her book blog here.

Saturday was the second annual Hitchin Children’s Book Festival, and this year was even bigger and better than the first time around. While Danny and Sam, who organise the festival, only made 60 tickets available last year as a kind of trial run, this year there were 150, which were pretty much sold out by the end of the day!

It was lovely to see my old tutor James Mayhew again, and to finally get to see one of his live performances. It was also really nice to meet Martin Impey, whose wonderful illustrations celebrate and commemorate the sacrifices of ordinary people during the First World War. Naturally Celestine now has a couple more signed books for her collection, and a signed poster from James for her wall.

The festival got a piece in our local paper, The Comet, which you can read here. You can also read my blog post about last year’s Hitchin Children’s Book Festival. Hopefully next year’s festival will be just as good, if not even better!

The wonderful Tales on Moon Lane independent children’s bookshop in Herne Hill, London, were kind enough to invite me for an Isadora Moon event and to do a window display. We caught the train there, which gave me an excellent opportunity to knit some more miniature bobble hats:

Pink Rabbit came too. He’s had a very busy and exciting week full of new experiences. Here he is at London Kings Cross station:

When we got to Tales on Moon Lane bookshop, they had a wonderful Isadora Moon display set up:

And Oxford University Press has sent these amazing giant Isadora Moon covers for the window display:

After we’d met all the lovely staff and had a quick drink, it was time to start the window display. It was a big window, and I’m not used to drawing on such a large scale. Henry had to help our with some of the colouring, but we got there in the end!

As well as doing the window display, we also ran an Isadora Moon party.  The children got to make Isadora Moon Winter Mini Books, play a couple of quizzes and practise drawing some of the Isadora Moon characters.

Afterwards, the children had the opportunity to get their books signed, as well as having a photo with Pink Rabbit:

Having already drawn on the shop’s windows, I thought I might as well graffiti their walls too before I left:

My next couple of weeks are a bit quieter, but I’ve got plenty coming up between now and Christmas. You can keep up with my latest events on my events page and through Facebook. I’m always adding more, so check back frequently.  You can also keep up to date with what I’m up to by subscribing to my newsletter.

I’ve still got Pink Rabbit Enamel Pins in stock, and you can order these in my shop. Isadora Moon Makes Winter Magic is available now from Amazon, Waterstones and all good book shops.

If you’re looking for free Isadora Moon crafts and activities for home or school, check out my resources page. And if you’d like to book me for a school visit this term, check out my schools page.