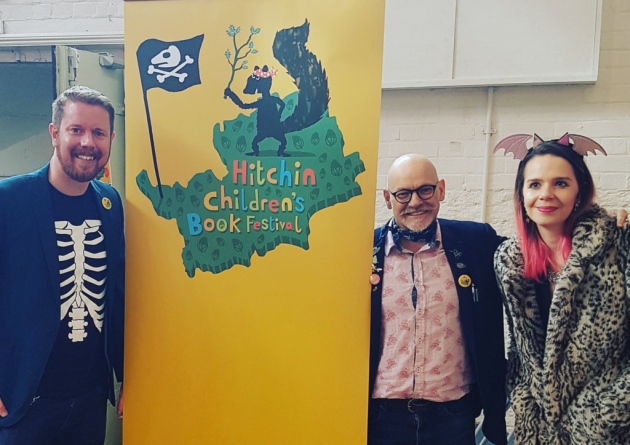 Being part of the first Hitchin Children’s Book Festival

Danny Pearson, is a writer and editor of children’s books and the Beano. Like me, he grew up in Hitchin and he had the idea that there should be a Hitchin Children’s Book Festival. When he suggested the idea on Twitter, I agreed wholeheartedly. Hitchin is full of young families, so a children’s book festival would be a perfect fit. I jumped at the chance to be a part of it!

Danny set about organising the festival and contacting a couple more local authors and illustrators. Although we initially hoped for a trio, one author/illustrator who was interested had to drop out due to an event scheduled by his publisher. Fortunately, my former tutor, the brilliant James Mayhew was also fully behind the idea of a Hitchin Children’s Book Festival and able to commit. I wrote a little here about how James was a great influence in my becoming a children’s book author and illustrator.

Danny got in touch with Sam Mason at the Hitchin British Schools Museum. The museum was happy to host the festival. We all met in August to talk through plans for the festival:

I was excited to share the news straight away after, but we decided to co-ordinate a reveal in September so it would have the most impact.

Suddenly the poster started appearing all over Hitchin…

The classrooms soon filled up for the author events:

For a first go at a book festival for children in Hitchin, it ran very smoothly and seemed to be enjoyed by everyone. This was down entirely to the efforts of everyone who helped bring it to life, all of whom helped out as volunteers.

After the Hitchin Children’s Book Festival

Danny is already thinking about the next festival:

We also came away with two of James Mayhew’s latest books. I wanted Katie and the Starry Knight and Henry really liked The Knight Who Took All Day. We bought both!

James was even kind enough to give us / Celestine the illustration he created in his event. Henry loves knights and dragons, so he was really pleased with it. He’s framed it and put it up in Celestine’s room.

Another excellent to keep up with me is my email newsletter. Just fill in your email below for the latest Isadora Moon news and automatic entry to some of my giveaways. I won’t spam your inbox, and I won’t pass on your address – promise: