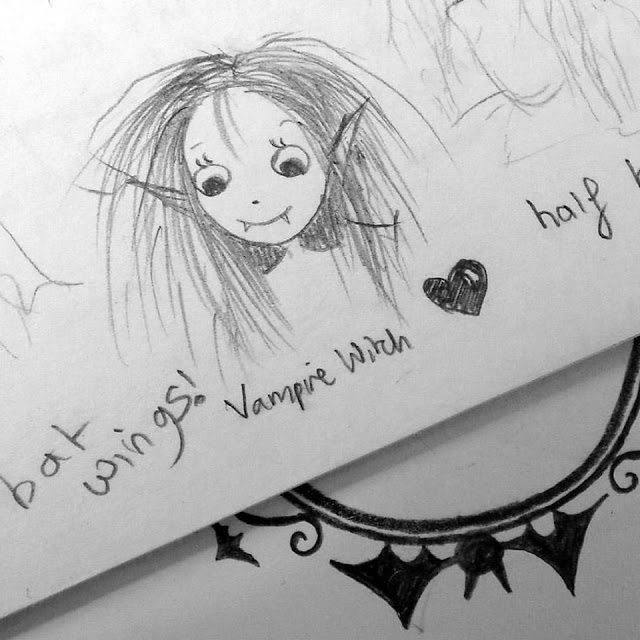 The story of Isadora Moon, Pink Rabbit… and Victoria Stitch

What is the story of Isadora Moon’s creation?

It’s only four days until Isadora Moon goes on a School Trip is officially out. I can’t believe there now are six books in the Isadora Moon series. It seems like a good time to retell the story of Isadora Moon and how she came to be.

The story of Isadora Moon starts about ten years ago!

The story of Isadora Moon begins with a character called Victoria Stitch. That name may sound familiar if you’ve checked out my Blogspot. Victoria Stitch is one of my favourite character I have ever created. She first came into being during my Art Foundation course ten years ago. She was a naughty fairy type creature and she had a pink rabbit who went everywhere with her.

I was eighteen at the time and I remember the kinds of things that inspired me back then:

…And so Victoria Stitch was born, along with her Pink Rabbit sidekick.

The Character of Victoria Stitch

Personality-wise she was a mean, dramatic character, probably because I was feeling quite angsty at the time. Well, I was a teenager! I also remember feeling very free and excited during that period in my life. So I channelled all these energies into Victoria Stitch and she became like my alter-ego. She was (and still is) very special to me. I ended up writing and illustrating a picture book about her on my foundation course for my final project.

Three years later, on my degree, I redid my Victoria Stitch book. By that point she had changed quite a bit and grown with me. I had cured myself of the pink hair phase (by dying my own hair pink for a while and then getting bored with it) so Victoria Stitch had also got bored of the pink hair! (Obviously I’m back to loving the pink hair now!) She now had black hair and, instead of traditional fairy wings, she had black bat-like wings.

You can see she was still quite an angry, spiky, mean character – because that’s just who she was by then. Poor Pink Rabbit! (He is much happier with Isadora Moon now but shh don’t tell Victoria Stitch that!)

I was pleased with this book at the time and I showed it to quite a few publishers, but I was always told that Victoria Stitch was too mean, too adult, too spiky for a children’s picture book.

After my degree I continued to work on Victoria Stitch in my spare time. I always came back to her. When I was studying my MA, I wrote Victoria Stitch number three. This is actually a 65,000 word young fiction book. (For context, Isadora Moon books are about 6,000 words, while most adult novels are 60-80,000 words). I was pleased with it after I finished writing it, but rereading it later I could see it is far from publishable. It hasn’t seen the light of day since!

However, to accompany the young fiction book I created some more illustrations of Victoria Stitch. Naturally by this time she had changed yet again! I now drew her with pen and ink in a slightly looser style, and only in black and pink. I was really pleased with how this looked. The black and pink aesthetic was one I really loved.

Victoria Stitch after university – Round two

At the end of my MA I got a book deal for I am a Witch’s Cat and then I got an agent. I was busy with other work so Victoria Stitch didn’t get a lot of attention for a while. But she was always there at the back of my mind! And occasionally, when I had time, I would work on her.

After I got married in 2014, my agent organised some meetings for me with a couple of publishers as I was hoping to get some extra work now that my wedding was over. I took my portfolio to London and showed it around. Inside my portfolio I had a page of my Victoria Stitch pen and ink drawings all done in black and pink. One of the publishers spotted these and said how they thought Victoria Stitch would work well as a young fiction book.

And that’s when it clicked…

The first page in the story of Isadora Moon

I thought: I could create a heavily illustrated young fiction book for younger children. A shorter one, about 7000 words. That way I wouldn’t lose the black and pink illustrations and I could have a lot of them but it wouldn’t have to be as simple as a picture book.

It was like puzzle pieces that had already been there for ages all suddenly fell into place. I felt so inspired that I immediately went home and started to create something.

At first I kept Victoria Stitch as the adult character she was and just tried to write a more simple story about her. But it wasn’t really working. I knew Victoria Stitch would have be become friendlier and kinder for a young fiction book and that just wasn’t her. She is who she is and it felt wrong to change her. Also she is so special to me that I couldn’t just switch her personality like that.

And so Isadora Moon was born!

As soon as I did this drawing I knew this was her:

I added the little vampire fangs on a whim just because I wanted to see what they would look like and then I decided I really loved them. Already Isadora Moon was becoming a character in her own right because Victoria Stitch did not have vampire fangs.

I started to think then: ‘why does she have fangs? And little bat wings? What species is she?’ At first I toyed with the idea of Isadora’s mum being a witch and her dad being a vampire but that didn’t really make sense. Then I realised: Her mum is a fairy! Obviously – That’s why she has the wings. And they are bat shaped wings because her Dad is a vampire. And then the fangs made sense too.

I loved the idea of a fairy and a vampire producing a hybrid offspring because, as I said before, I love juxtaposition. I love the look of something slightly Gothic contrasted with something really pink and sugary.

From character sketches to story outline

After that everything started to come together. Isadora Moon’s world was sort of already there: a mixture of vampire and fairy. And then that suggested a backstory for her which lead to the plot of the first book. I think it was Henry though (I must give him the credit!) who suggested that a story about a vampire fairy going to school could work well. Because which school would she go to? A vampire one or a fairy one? Where would she fit in? Would it be difficult for a vampire fairy?

Moving towards a proof-of-concept

I do like the effect of this as it’s a bit more sketchy, but it took sooo long. I used this method for the seventeen or sopages I illustrated for the dummy book…

Isadora Moon steps out into the world

Then I sent the whole lot off to my agent and waited excitedly. I felt SO passionate about Isadora Moon and I had felt SO inspired creating the whole thing. I was really hoping a publisher would take it. And luckily… they did! Amazingly, Oxford University Press liked Isadora Moon so much that they offered me a four book deal.

That was when the real work started because I had three more books to create. Fortunately, the publisher suggested to me a less long-winded way to draw Isadora Moon. I just started to draw her in pen and ink which cut out a few steps of the process and was a lot quicker! I am not sure how I would have got four books completed if I had been doing it the original way. The pen and ink also gives the pictures a cleaner, crisper look I think.

After I’ve drawn the outline I fill it in with watercolours and then scan it into the computer to change into pure black and pink as the books are printed in two colour. This process actually takes just as long as drawing and painting the image but it’s worth it. And it has to be done anyway for printing.

I am just so so happy that Isadora Moon has made it into publication. Because you know, she is a little piece of Victoria Stitch! That is why I am so passionate about my Isadora Moon books. They came completely from my heart. I absolutely adore Isadora Moon and her world. I have absolutely loved every second of writing and illustrating these books, and I love that number six is now being released.

…and that’s the story of Isadora Moon!

If you haven’t already, I hope you enjoy reading the story of Isadora Moon and her adventures across all six books. They are all available on Amazon, in Waterstones, and at most independent bookshops.

You can order the first book, Isadora Moon Goes to School on Amazon here. It’s not essential to start with this one, as each book stands alone, but most readers prefer to.

The story of Isadora Moon continues with her most recent adventure, Isadora Moon Goes on a School Trip. You can order the book on Amazon here. It’s officially out on September 7th, but Amazon and several Waterstones got copies early.

If you would like to come ask me questions about Isadora Moon check out my upcoming events on my events page in person, then.