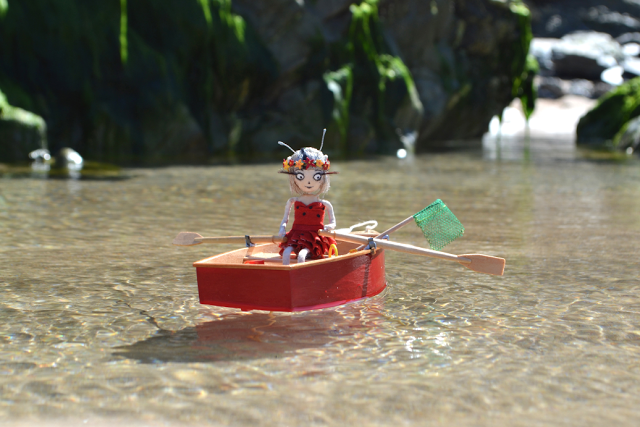 Isadora Moon and her adventures are always very close to my heart. In my video interview last week I talked briefly about how Isadora and Mirabelle’s dolls’ house games reflected the way I loved to play as a child. This week I thought I’d look back at the inspiration and story behind Isadora Moon Goes Camping.

In Goes Camping, Isadora and her family visit the Mermaid Bay campsite. Although I changed a few details, Mermaid Bay is actually based on one of my favourite places in the world: Polly Joke beach in Cornwall. This is a place I have visited all through my life, and I have more fond memories of it than I can count. I used to go here for long childhood holidays with my family, and I’ve been back lots of times as an adult. The whole time I was writing Goes Camping I was just pouring my memories of Polly Joke into it!

Mermaids in the bay

Are there really mermaids at Polly Joke beach? I’ve never seen one, but I always used to imagine there could be. Sometimes we used to find mermaids’ purses on the beach, which only fuelled my speculations. Then there are these magical caves along the sides of the beach. They create a sharp contrast to the bright, sunny beach with their dark and mysterious atmosphere. I could imagine mermaids swimming into them when the tide is in and they fill with water.

The caves always used to hold a sense of wonder for me. Just up the coast from Polly Joke is Holywell, so named for its ‘Holy well’. This ‘well’ was believed to have healing properties, and in olden-times parents would bring their sick children for a dip in the well to cure them. Although the exact location of the well isn’t agreed on, I always imagined it to be a pool in one of the caves. In this cave the rocks form a sort of slide, which I imagined babies sliding down on into the pool to cure them.

In my mind, the whole place used to be alive with magic. The rockpools enchanted me, and I envisaged fairies splashing and frolicking in them when there were no people around. Similarly, the sandcastles we used to build I could imagine lighting up at night. I thought of them as the homes of miniature rabbits who would come out and bustle about at dusk. Even without fantastical parents and mermaids, childhood holidays are always magical!

We used to spend these long days on the beach as a whole family, just like Isadora’s family do. (Although my dad was not so reluctant to enjoy it as Isadora’s dad is). We would have the windbreak up and the blankets spread, and my mum would hunt for cowry shells and seaglass in the sand. We would build sand castles and bodyboard in the sunshine all day until evening.

Games and experiences while camping

We didn’t camp every year – sometimes we stayed in one of the nearby cottages – but we did camp often. One year we camped for three weeks! Just like Mermaid Bay campsite, Polly Joke campsite is a short walk from the beach up a narrow sandy path. Alongside this path runs a little stream. One of my favourite games when I was about nine or ten was to put my ‘mascot’ characters into boats and watch them sail down this stream. (I still do that now sometimes!)

Also just like the Mermaid Bay campsite, the Polly Joke one has a toilet and shower block. I remember finding it novel to wear pyjamas in public when you go to brush your teeth – just like Isadora does. I also remember all the people queuing up to use the showers in the morning. That’s why I thought it would be funny to have Isadora’s dad spending hours in the shower grooming and relaxing.