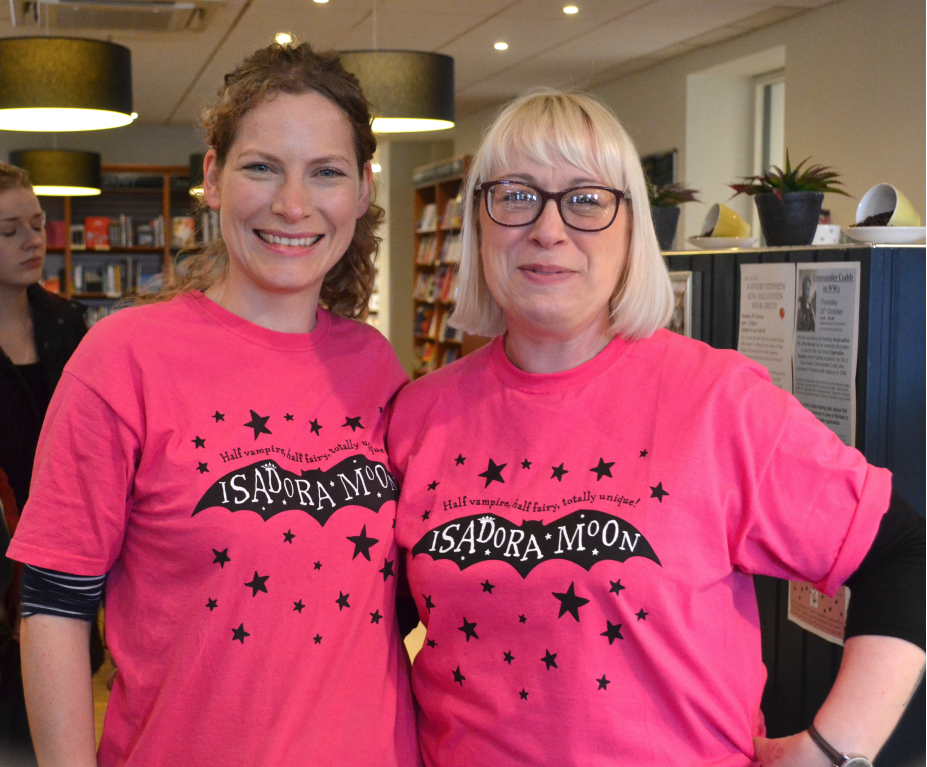 Last weekend we visited Waterstones in Portsmouth (also known as Pompey Books).  Because it was quite a long drive to get there we had another overnight stay in a Travelodge. So we set off in the evening and arrived late at night. When we woke up, raindrops were streaming down the windows and it was interesting to look outside as neither Henry or I had ever been to Portsmouth before, nor had Celestine. After a breakfast of instant porridge, we set off to find Waterstones…

A warm welcome in Portsmouth

The Waterstones in Portsmouth seemed so lovely and all the staff in there were so friendly and smiley! They really welcomed us and gave us some vouchers to get some lunch in the cafe upstairs. I was delighted to see that they had special Isadora Moon cupcakes up there with swirls of pink icing and bats and wands on them for decoration.

Downstairs, the children’s area had beautiful Isadora-themed decorations with iridescent streamers and bunting from the Isadora Moon party pack (get the download link by signing up to my newsletter!). Some of the children who came had dressed up in some really cool Halloween costumes.

As usual for my Waterstones events, we had colouring and activity sheets with plenty of sequins and glitter for the children. Something new though was the ‘make your own vampire / fairy wings’ Oxford University Press have put together. You can download these from their website if you fancy making your own pair:

The children took these home so they would have time to cut them out neatly, which meant I didn’t get to see any finished ones on the day. However, I did another event later this week at Waddesdon Manor (separate blog post on that coming soon!) where I did actually see a child wearing a pair. They looked fantastic!

A miniature kitchen and a tiny fan at Waterstones Portsmouth

As with my other ‘autumn tour’ events, I brought along the 3D illustration scene of Isadora Moon’s kitchen. I changed it up this time though by also bringing along a new idea I was trying out: Isadora Moon’s tiniest fan!

I’ve been playing around with the idea of having a little mascot to photo in the different locations I’ve been visiting for a while now. At first I tried to make an actual mini Isadora Moon, but I couldn’t get that to work very well. As an alternative, I decided to make an Isadora-style little character. I gave her a black starry tutu and pink patent leather boots. The idea was she would be a tiny super-fan who would go along to every single Isadora Moon event up and down the country.  I even made her a teeny tiny copy of Isadora Moon to bring with her:

I was quite pleased with my little doll at first, but then I decided she still wasn’t quite what I envisaged. She may or may not reappear in some form in the future. The miniature book though will definitely stay. It’s the perfect size to go in the Isadora Moon kitchen set – even though it is kind of weird Isadora has a book about herself in her own kitchen!

Wrapping up the Waterstones Portsmouth event

I had a lovely time at my Portsmouth event. It was so nice to meet the children who came and the Waterstones staff. One of them had beautiful purple hair which I loved, but unfortunately I didn’t manage to get a photo with her.

One other thing I like about events is meeting all the children and hearing all their different names. I have always loved names. When I’m doing book signings, I have to ask for the exact spelling. There are some wild and wonderful variations, spellings and unique names out there! At Portsmouth I met a little girl with the name Seraphina, which i thought was such a beautiful name. I keep lists of potential names for future characters, so that’s definitely one to add.

Other stops on the tour in the last week,  upcoming events and the Halloween Costume Competiton

Apart from the Portsmouth event in the last week, I had an absolutely wonderful school visit at Elizabeth Woodville Primary School in Leicestershire. I’ve also had a very busy day at Waddesdon Manor as part of their Horrible Halloween, and just yesterday I was part of the inaugural Hitchin Children’s Book Festival. Each of those deserve their own blog post, so I’ll write those up when my events quieten down a little.

For now, the Isadora Moon Autumn Tour is ongoing, with Manchester Waterstones the next stop. You can keep up to date with all my upcoming events on my events page.

The Isadora Moon Halloween Costume Competition is still ongoing. You have until 6th November to share your snaps of your best Isadora Moon-themed costume with the hashtag #IsadoraMoon. You can see the full details on my Facebook page.

Finally, if you haven’t already, then please consider subscribing to my newsletter. It’s a great place to hear the latest Isadora Moon news first, including upcoming events. I also do automatic entry for some of my giveaways for subscribers. I won’t spam your inbox, and I won’t pass on your address – promise: