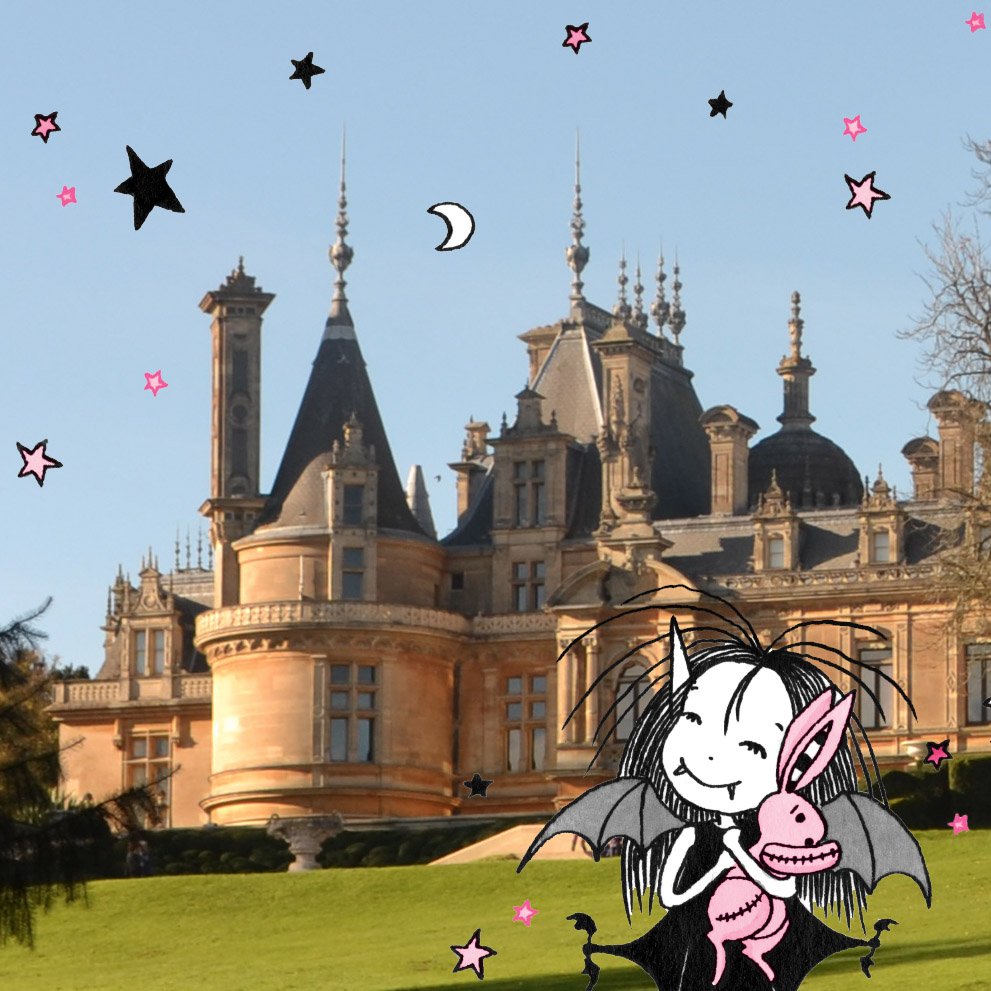 I was honoured to be asked to present at Waddesdon Manor for their ‘Horrible Halloween’ celebrations during half term. They actually made the Wednesday into Isadora Moon day, and asked me to do four presentations as well as book signing!

It was a full-on day, with four sessions followed by book signings. And I didn’t even have my events helper, Henry there. Unfortunately, he came down with a bug the night before and had to spend the day on the sofa. My mum was supposed to be looking after Celestine while we both drove to Waddesdon manor, but she and Celestine ended up coming with me instead.

We set off early in the morning, and drove through the curling mists at the start of a beautiful October day. When we arrived, the manor itself was stunning, all gothic with turrets and spires. I immediately knew Isadora Moon would feel right at home here.

The grounds were absolutely huge and beautifully landscaped with manicured lawns, neat borders, and majestic trees. I’m sure Celestine must have enjoyed being pushed round it in her pram. I wish that i had had more time to look round it. One day I will go back to Waddesdon Manor and visit it properly!

Getting Ready for my Sessions

I arrived and discovered that I would be doing my sessions in a big stripy red and white tent (almost the Isadora Moon colours!).

It was decorated wonderfully inside with Halloweeny pumpkins.

We put up some Isadora Moon posters and bunting and set up the Powerpoint in an area called the stables. There was a courtyard type place with cafes and a shop and things around it. Around the stables, the Waddesdon Manor staff had hidden an Isadora Moon treasure hunt. It consisted of pictures from the books put in places for the children to try and find. There was a long table of Isadora Moon books to buy set up there too. Hay bales were set out in the stripy tent for the children to sit on.

Overall it was an absolutely wonderful day and I hardly had a second to stop and take it in! I was either doing my workshop with the children and their parents – teaching them to draw characters from the book and playing Isadora Moon games with them or I was signing books. It was a full on day and I was tired by the end of it, but it was amazing! I am so happy that Waddesdon Manor wanted me to bring Isadora there! Thank you also to Oxford University Press for organising it for me and being there too.

I hope you Halloween was the opposite of horrible. As you may have seen, I’ve been running an Isadora Moon-themed Halloween costume competition. Entries are now closed and I’ll be announcing winners soon. For now, here are some of the absolutely amazing entries I’ve seen. Don’t worry if your entry isn’t featured below: I’ve still got to carefully check Twitter, Facebook and Instagram for every entry:

Henry also got into the spirit of an Isadora Moon-themed Halloween with his pumpkin carved into the likeness of our favourite vampire fairy:

Finally, if you haven’t already, then please consider subscribing to my newsletter. It’s a great place to hear the latest Isadora Moon news first, including upcoming events. I also do automatic entry for some of my giveaways for subscribers. I won’t spam your inbox, and I won’t pass on your address – promise: