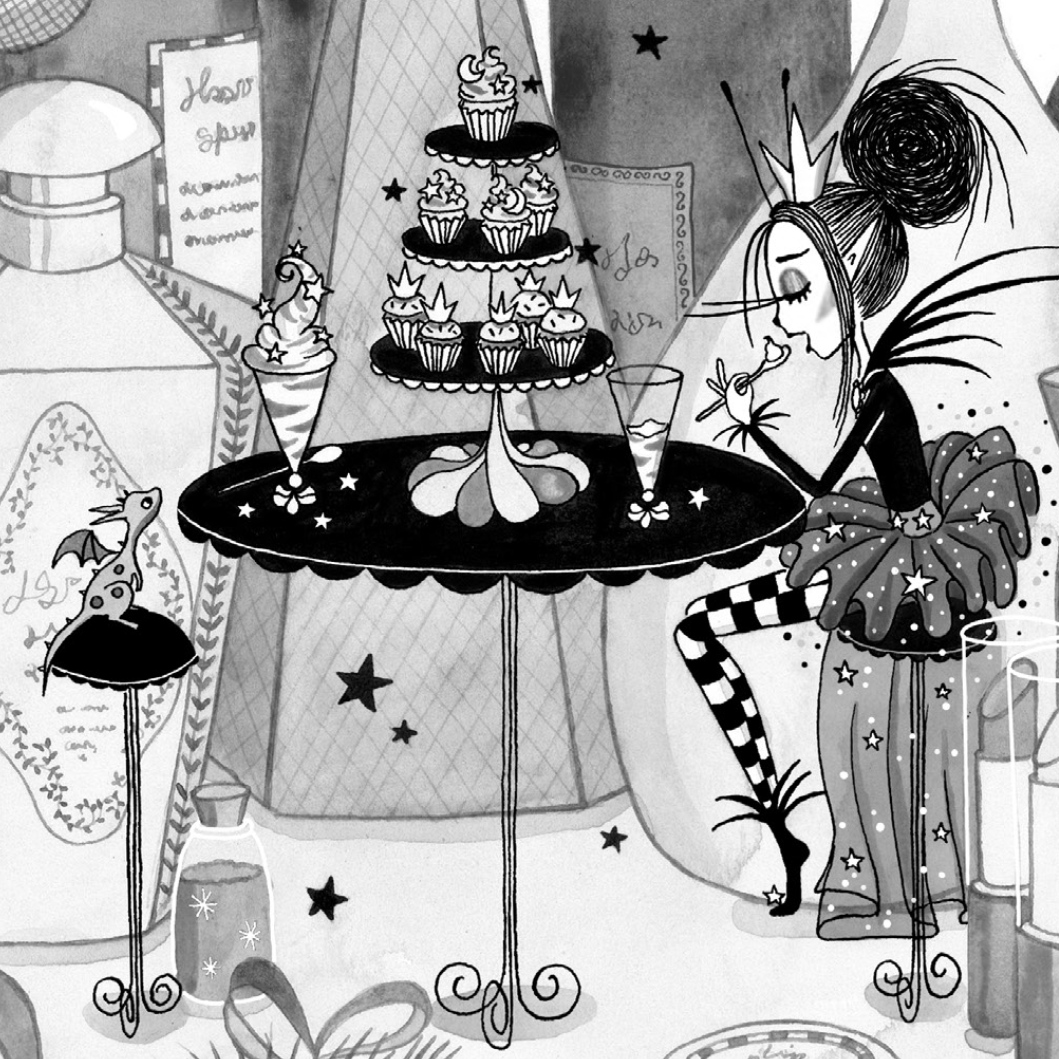 One of my favourite images from Victoria Stitch Free and Famous is the one near the end, where Victoria Stitch is having a tea party, sitting atop a human sized dressing table. It’s part of a bonus picture book that I tagged onto the end of the novel, after the main story.

The picture book is all about Victoria Stitch, although the wiskling author of the story, Winnika Berry, got some of the details wrong! Victoria Stitch pretends to be outraged by the story, but secretly she loves that there is a book all about her! She especially likes the page that reads: ‘Sometimes she stopped for a tea party with Stardust, but Stardust didn’t like tea so they eat raspberry ice cream instead.’

And I have a special fondness for the image from this page because I actually originally created it fifteen years ago, when I first came up with Victoria Stitch at university! Back then, she had pink hair and a Pink Rabbit sidekick. I wrote a little picture book about her and this was the dressing table image from that book:

As you can see I was very into experimenting with all kinds of mixed media. I used a lot of glitter and sequins in this image!

Three years later – for my final major project on my degree, I redid my Victoria Stitch picture book and drew the dressing table scene again. You can see how my style has evolved over time. I was determined to draw and paint everything at this point without using any collage. You may also notice that Victoria Stitch had evolved a bit too! I had gotten rid of her pink hair and given her little bat wings!

At the end of my second middle grade book, Victoria Stitch: Free and Famous, I felt very lucky to be able to include another version of my beloved original picture book after the end of the main story. It is edited slightly to fit in better with the story but a lot of it is very similar. I was so excited to be able to include it. The dressing table scene was the first image I sketched out of the entire book!

I’m so happy to have got it into the book! And I love that it’s so very similar in essence to the original image I created fifteen years ago!

With love and diamond dust,