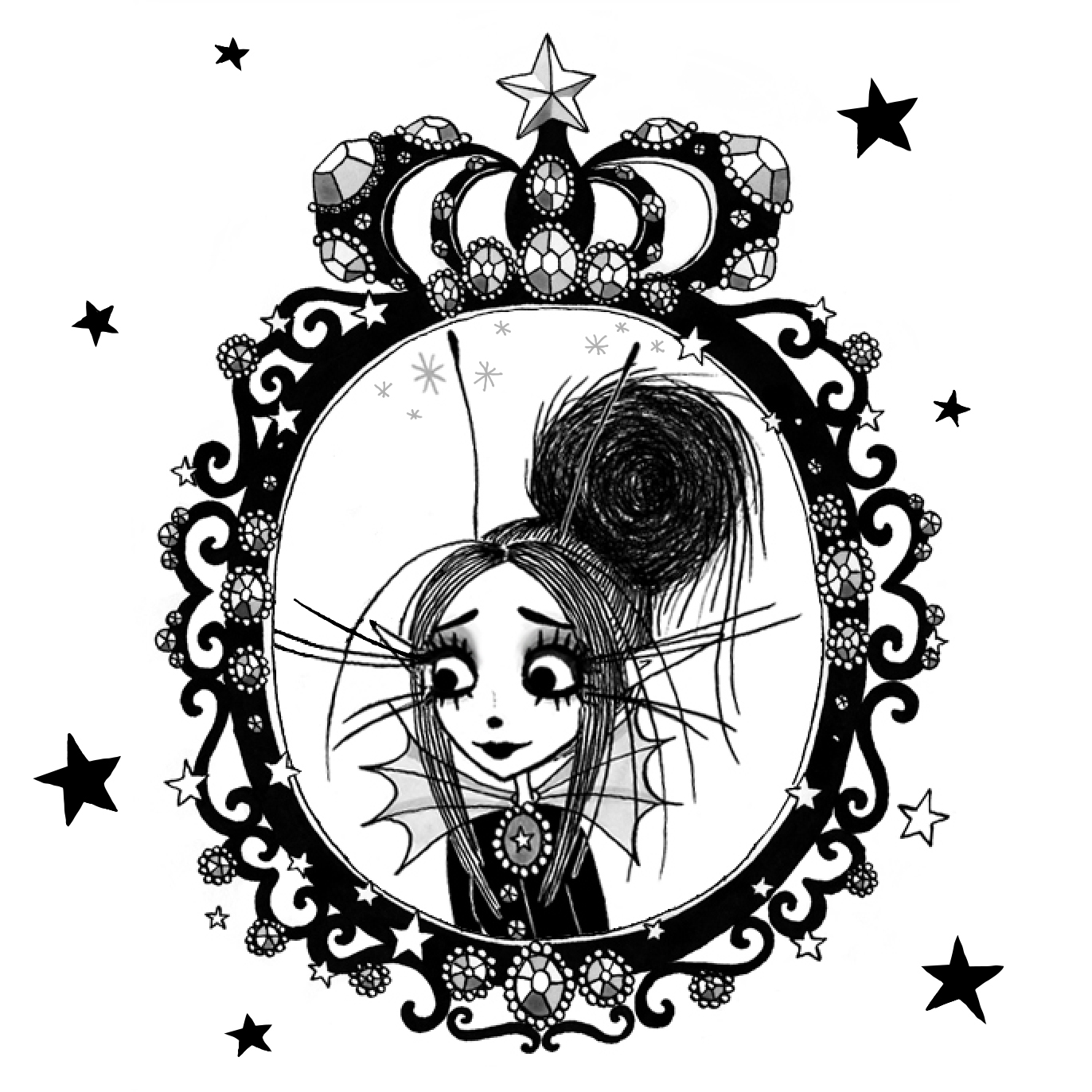 Behind the scenes, Victoria Stitch

Victoria Stitch Bad and Glittering is my first middle grade book. It came out in September 2020 and it’s the book that I am the most proud of. It was quite a beast to write, definitely a lot different from Isadora Moon, and it took me a long time!

The early days of Victoria Stitch

I actually created Victoria Stitch 15 years ago, when I was 19! She’s always been my most special character that I’ve taken through life with me because she just embodies everything I love: glamour, glitter, gothic-ness. AND she’s miniature sized! I have ALWAYS known I wanted to get a book about her published.

When I very first created her however, Victoria Stitch wasn’t a wiskling exactly like she is now. She started as just a very naughty fairy type character in an unpublished book I wrote when I was 19. Here’s her very first incarnation. She had pink hair and she’s got a crown because she has always been obsessed with being queen.

As the years went on Victoria Stitch developed. Here is her second incarnation:

She has always been a very angry, passionate character. Her story has always been about wanting to be Queen. Wanting to be seen! Here she is having a tea party on top of a human dressing table in the second (unpublished) Victoria Stitch book that I wrote. Look what she’s written in the mirror in lipstick!

Actually in this book she was so naughty that she ended up getting baked in a cupcake at the end of the book!

Here she is a little more developed again! I was more into sketchy looking pen and ink at this time! This version of Victoria Stitch is what inspired me to create Isadora Moon! But that’s a whole other story…

Eventually, after many years, Victoria Stitch reached her final incarnation as a wiskling:

I created wisklings a bit later than the character of Victoria Stitch at a time when I really wanted to invent my own species of tiny people that was all my own. It happened in a roundabout way. I have always liked having a miniature ‘mascot’ to take around with me. Exploring the world through a miniature person’s eyes is kind of like therapy for me in a weird way. I love the idea of having a tiny secret little magical person to put in my pocket and make tiny things for and take on tiny adventures!

Eight years ago I decided I wanted to create my own species of tiny person. So after a lot of thought and fine tuning I invented wisklings! Wisklings’ defining features are:

Once I had created this world, the first thing I wanted to do was make a tiny wiskling in 3D! Here is the first wiskling I made back in 2012. I called her Celestine because I loved the name and I had a great time taking her on adventures! I loved the idea that she was a tiny wiskling who had come to visit me in the human world.

Combining the worlds of Victoria Stitch and wisklings

In my head Celestine had a whole backstory back in Wiskling Wood. I envisaged her as a very ‘golden’ sort of character. Kind and good. After coming across some exquisite tiny necklaces at a miniatures fair, I decided that she would be a jewellery designer. I made her whole miniature bedroom in my dollshouse castle, all gold and covered with gems! And that is how the character of Celestine in my book Bad and Glittering began!

I loved the idea of wisklings and their world SO much that I decided after a while that Victoria Stitch who I had already created five years earlier was also a wiskling and I loved the idea of her being Celestine’s twin. I really wanted to bring her into the world somehow as she was my other great passion.

Becoming Queen was ALWAYS central to Victoria Stitch’s story and so I mashed that story up with my vision of wiskling world and that’s how the story for Bad and Glittering began! And now that story is finally published:

Twins.
Moonlight and sunshine.
Dark and sweet.
Bad and glittering.