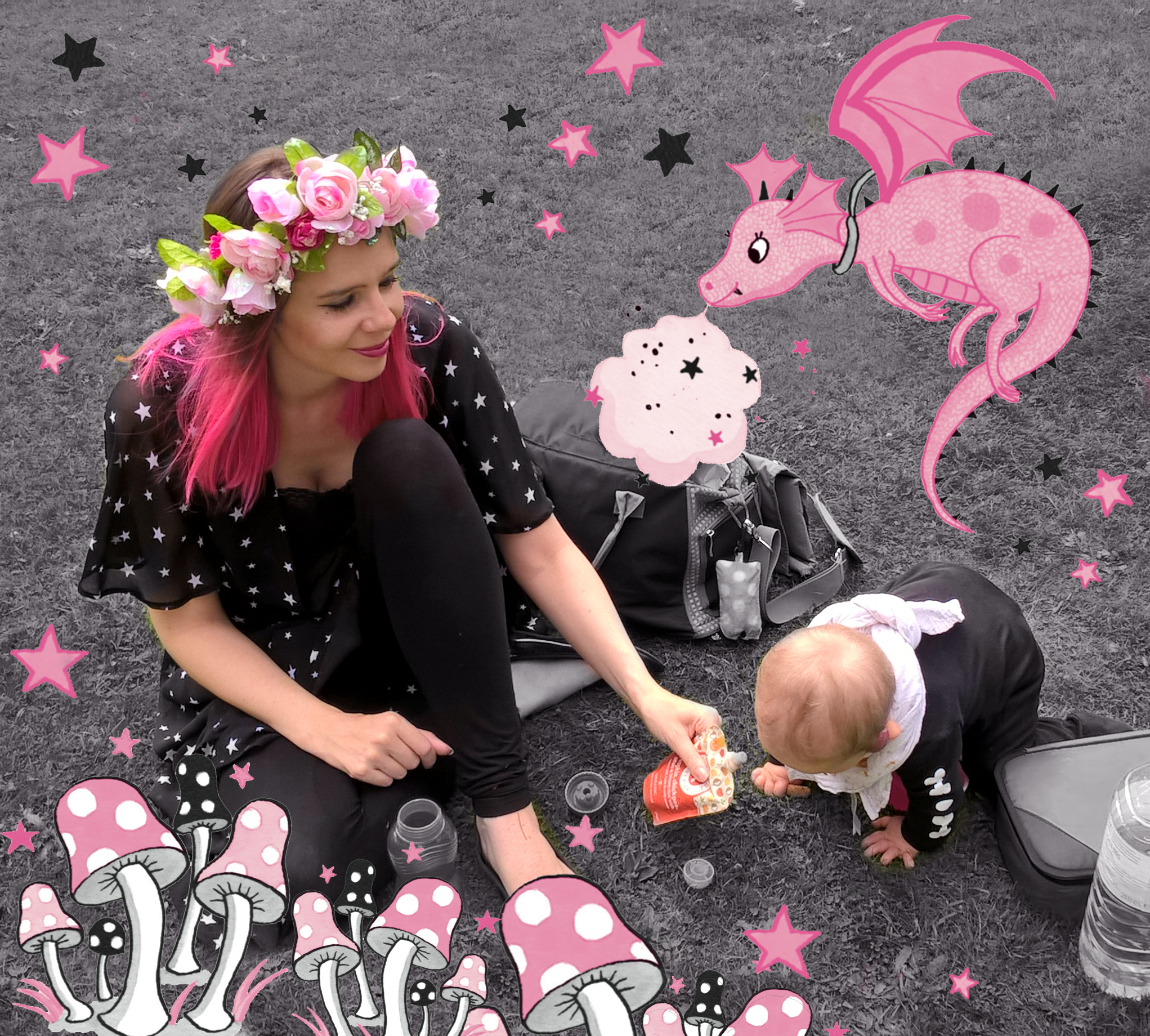 Getting ready for the St. Albans and Harpenden Isadora Moon Events

It’s been another busy – but more importantly fun! – Saturday meeting fans across Hertfordshire at my Isadora Moon events.  This week we visited the St. Albans Waterstones and Harpenden Books. But it wasn’t just me who was excited to be getting ready for more Isadora Moon events:

Celestine loves to join in on the dressing up for our events. She has her special little skeleton sleep-suit. It was sent to her by one little girl who loves Isadora Moon and knew I had recently had a baby. Of course, I wore my flower crown today. Today was a big flower crown day. I’m currently trying to put together an even more sparkly magical costume, but I’m not quite there yet.

It always takes longer getting out the house with a baby than we expect, so we only just made it in time to St. Albans. When we arrived, there were already a few little girls ready and waiting. We got stuck straight into the decorating activities:

As usual, the children produced a variety of high quality artworks. Most of them tend to go for the plain picture of Isadora Moon where you can add her outfit, and they always do this differently. There was one little girl who was just two years old. She loved colouring in the stars on the tent picture. (She was also very interested in the stuffed pink rabbit I brought along!) Another girl told me she was an artist. She loved drawing anything and everything, and also would go through the recycling to find art materials for models.

I always start with a little bit of a talk about Isadora at my Isadora Moon events before the reading. If most of the children already know about Isadora, then I usually let them decide which book they would like the reading from. Today they wanted Isadora Moon has a Birthday, so I read the opening pages where Isadora talks about the differences between fairy, vampire, and human parties.

(Just as a side note – the Isadora Moon party pack is now finished and available. If you want to host your own Isadora Moon-style party, or just want to try some Isadora Moon themed games or food, you just need to sign up for my newsletter to receive a link for the party pack:

After the reading and signing a few books, it was time to pose for some pictures:

We were at St Albans for about an hour and a half. I’m always touched when people turn out specially for the Isadora Moon events, but I also love those chance encounters with people who discover Isadora for the first time when I’m there. As we were starting to wrap up, there was a girl browsing with her mother. Her name was Estelle – a name I love because it means ‘star’, as in ‘stellar’. We invited her over to do some colouring and started telling her a little about Isadora Moon. Both her and her mother were really enthusiastic and complimentary about the books. They asked me lots of questions about Isadora, and went away with signed copies of Isadora Moon Goes to School and Isadora Moon Goes to the Ballet.

Just as we were packing up, another family came in with their little boy and little girl. Even though their little girl was only eleven months, the parents were very interested in Isadora Moon. We got chatting about our children and they were very friendly. They offered Celestine a stick of cucumber and slice of apple, since they were giving them to their two. They bought a couple of books in the end, so hopefully their little ones will enjoy reading about Isadora’s adventures when they’re old enough!

I’ve only been to Harpenden twice – both times for Isadora Moon events – but it seems like a lovely little town. I wrote about my last event at Harpenden Books here and here. We got there early so we could have a little picnic on the green:

We sometimes use ‘Babease’ food pouches as a less-messy alternative to finger food if we’re on the go. However, that didn’t quite work out as Celestine decided to grab it and spurt it all over her outfit. We cleaned up, changed Celestine into her starry outfit and headed into Harpenden Books.

Harpenden Books is a lovely little bookshop. It’s part of Waterstones, but is run more like an independent bookshop. It’s not very big, but it’s nicely laid out and has a lovely atmosphere. Both times we’ve been we’ve spotted books and other things we’ve noted down as potential presents to remember for Christmas. I couldn’t resist getting a quick snap of the end-papers in these lovely editions of the Moomintroll books they had:

I already have (and love) all of the Moomintroll books but DO WANT.

More importantly though, they also had a tempting stack of Isadora Moon books, so I had to tear myself away from potential temptations to focus on the books I was there to promote:

The first girl to arrive actually came to my previous event at Harpenden Books, and was back to get her new copy of the just-released Isadora Moon Goes on a School Trip.

She’s the one colouring at the table. The girl looking at the books in the corner with her mother was meeting Isadora Moon for the first time. They bought a copy of Isadora Moon Goes to School, the first book, to try. Hopefully she enjoys  it!

Harpenden was the last of my Summer Holidays / Hertfordshire Isadora Moon events. I’ve got a couple off weekends off now, until my next event at Derby Waterstones on September 16th.  As a post-event treat, we decided to visit the Pudding Stop in St Albans where I previously had the most amazing flourless chocolate cake. They didn’t have the cake this time, but I did have this scrumptious brownie sundae:

Henry had a plain chocolate brownie and tea, while Celestine had the healthy option of half a banana. She seemed to enjoy it though:

It’s been a great few weekends meeting different people at the Hertfordshire Waterstones shops. Thanks to the staff at all the stores for facilitating such brilliant events. It’s got me feeling ready for the very busy autumn I’ve got coming up. If you haven’t already, you can read about my Isadora Moon events at Welwyn and Hatfield last week and my Watford event two weeks ago.

I’ll wrap up this week’s post with a couple of picture I love from today. Here is Celestine and me in our matching Isadora Moon starry dresses, and Henry playing with Celestine at St Albans Waterstones. Naturally, Celestine has her very own pink rabbit with her: