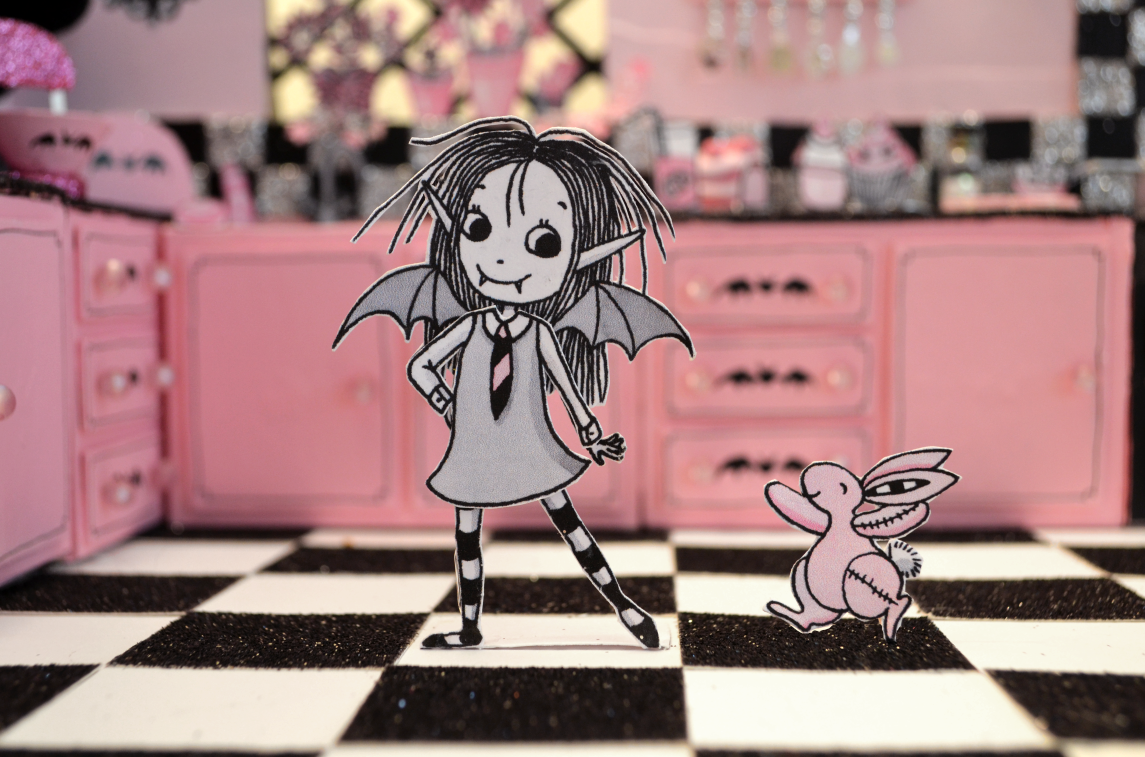 One of the best things about my job is being able to create and give life to magical worlds. I love the power of stories and illustrations to transport us to a fantastical new place. It’s even more exciting when you can actually see and touch a part of those magical worlds. That is why I have always loved miniatures and 3D illustration – and why I have spent the last few days putting together a 3D scene of Isadora Moon’s kitchen to take on tour with me.

At my last school visit I took in a couple of 3D sets I had made for I am a Witch’s Cat. The children were fascinated, which gave me the idea of making one for Isadora Moon. As I’m still having physio from straining my hand, I was a bit worried about getting it finished in time for Bath Children’s Literature Festival. However, I have filled our attic with 3D illustration sets from past projects, including the Glitterbelle series. I was able to repurpose some of those models, and I enlisted Henry to do some cutting out, which meant I was able to finish after all.

In case you’re wondering, the set is mainly made out of cardboard, paper and glitter. I used mount-board for the walls and floor.  These were stuck together using a glue gun. The cakes are made out of Fimo, while some of the bowls are painted dolls house accessories.

For the characters, I printed out illustrations I had already done from the books, stuck them onto card and cut them out. Some of them are supported by wire on the back, and Count Bartholomew is held in place with a wooden skewer. 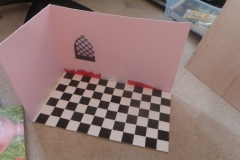 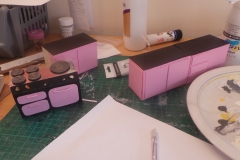 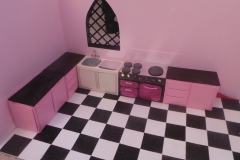 There is another gallery of the finished kitchen at the end of the post.

The good and bad of 3D illustration

3D illustration is not commonly used, but I love it. I suspect there are three reasons you don’t see the technique very often:

Despite this, I absolutely love the effect 3D illustration creates. Everything seems so tactile and real. It’s the same reason I love stop-motion animation. I find there are few books which feature 3D illustration, but I wish there were more. I did a post on my other blog about the 3D illustrated books I had discovered back in 2011.

My first experiments with 3D illustration

The first time I came across the idea of 3D illustration was during my undergraduate degree. We were set a project called ‘Illustration City’. The idea was that each student created a 3D-illustrated model of an apartment that a character would live in, decorated in that character’s style. I remember getting really into the idea and working solidly for a whole evening to get it all together. The next day my tutor was surprised I had gotten so much into it, when other people had spent far less time on theirs as it was only meant to be a fun end-of-term exercise.

I didn’t think about or use 3D illustration again for quite a while. A couple of years later, in 2010, I started thinking about ways to experiment with my illustration. I kept thinking about the apartment model I had made, and decided to remake it for a new story idea. Below is version 2. Looking back, it’s far too busy and I’m not that pleased with the character design.

It was in November 2010 I made that second 3D illustration, then I left the technique again until the following spring. If you read last week’s post about how to draw children, you’ll be familiar with Casper and Jasper. I spent a lot of time developing the character designs for that and finding a visual style that worked. Seeing me struggle to settle on a design, one of my MA tutors suggested I try it in 3D. This was the result:

I was pleased enough with the result to enter the project for the Macmillan Prize. Casper and Jasper ended up being highly commended, which was very encouraging, so I stuck with the style for my next project…

Getting published with 3D illustration

For my final project of my MA degree, I started developing a story about a little girl who wears a catsuit and thinks her mum is a witch. After struggling with drawing children for what seemed like ages, I had finally created a child character that I thought was pretty cute. This got me excited about the project.

I’ll probably do a more detailed post at some point about my route to getting published. In brief though, our MA tutors took the class’ work to Bologna Children’s Book Fair, and I am a Witch’s Cat got picked up by Harper Collins US.

Developing my 3D illustration for publication

My contract with Harper Collins US was a two-book deal, so they wanted a sequel to I am a Witch’s Cat. This was Happy Halloween Witch’s Cat. The story this time is that Halloween is coming, but Witch’s Cat doesn’t know what to wear. (Never mind the fact that she’s already wearing a cat costume, and tries on different costumes over the top of it…)

I think you can really see a difference between the first and second Witch’s Cat books in terms of the neatness of my set design. By that point I’d had a lot of practice cutting out and sticking together tiny paper props!

A UK-based publisher, Parragon, had seen my Witch’s Cat books and liked the 3D style. They asked if I would illustrate a range of princess story and activity books about a character they were developing called Glitterbelle. She was billed as “the sparkliest princess ever”, so how could I say no?

Here’s Glitterbelle in – where else would she be? – her kitchen:

It’s difficult to appreciate the scale of the ballroom below, but it ended up being the biggest set I have made so far. Well, it’s a ballroom, so it had to be. Roughly estimating, it’s about 70 x 70 x 70 cm.

It seems pretty ambitious looking back. The floor is actually made of real strips of wood I hand cut! Back when I made it, Henry and I were living at my parents’ house. Our bedroom was also my studio, so it’s a wonder could actually squeeze in there to sleep.  Fortunately, Parragon were doing the photography, so I was able to ship it off to their office soon after it was finished.

The last time I did published 3D illustration was also with Parragon. It was for the classic poem The Night Before Christmas. I started this in late 2014, before we bought our house, and finished in March 2015, a couple of months after we moved in.

3D illustration and me now 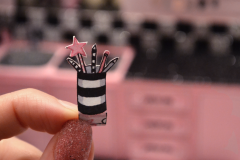 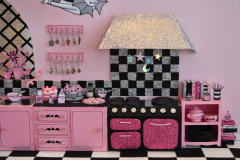 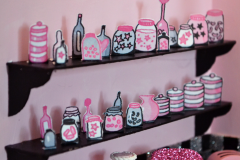 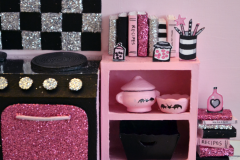 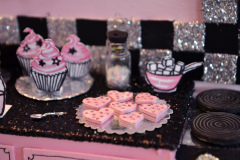 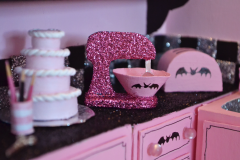 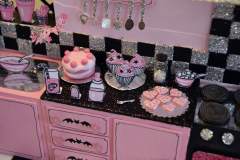 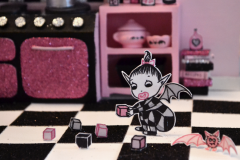 And that brings us up to now with my 3D illustration of Isadora Moon’s kitchen. I do love the style, and would return to it one day, but it does take at least two or three times longer than 2D, so… we’ll have to wait and see what the future brings.

In the meantime, you can buy all my published 3D-illustrated works on Amazon:

And you can see the Isadora Moon kitchen scene in real life at any of my upcoming events:

For further details of the above, check out my events page.

Finally, if you haven’t already, please consider subscribing to my newsletter:

I send out Isadora Moon news, competitions and activities every so often.